The Ethiopian Orthodox Tewahedo Church (Amharic: የኢትዮጵያ ኦርቶዶክስ ተዋሕዶ ቤተ ክርስቲያን?; Transliterated Amharic: Yäityop’ya ortodoks täwahedo bétäkrestyan) is an Oriental Orthodox Christian church in Ethiopia. The Ethiopian Church was part of the Coptic Orthodox Church until 1959, when it was granted its own Patriarch by Coptic Orthodox Pope of Alexandria and Patriarch of All Africa, Cyril VI. It should not be confused with the Ethiopian Catholic Church.

One of the few pre-colonial Christian churches of Sub-Saharan Africa, it has a membership of about 40 million people (45 million claimed by the Patriarch),[1] mainly in Ethiopia,[2] and is thus the largest of all Oriental Orthodox churches. The Ethiopian Orthodox Tewahedo Church is a founding member of the World Council of Churches.[3]

Tewahedo refers to the Oriental Orthodox belief in the one single unified Nature of Christ; i.e., a belief that a complete, natural union of the Divine and Human Natures into One is self-evident in order to accomplish the divine salvation of humankind, as opposed to the “two Natures of Christ” belief (unmixed, but unseparated Divine and Human Natures, called the Hypostatic Union) promoted by today’s Roman Catholic and Eastern Orthodox churches. According to the Catholic Encyclopedia article on the Henotikon [2]: the Patriarchs of Alexandria, Antioch, and Jerusalem, and many others, all refused to accept the “two natures” doctrine decreed by the Byzantine Emperor Marcian’s Council of Chalcedon in 451, thus separating them from the Roman Catholic and Eastern Orthodox — who themselves separated from one another later on in the East-West Schism (1054).

The Ethiopian Church claims its earliest origins from the royal official said to have been baptized by Philip the Evangelist (Acts of the Apostles, Chapter 8):

“Then the angel of the Lord said to Philip, Start out and go south to the road that leads down from Jerusalem to Gaza. So he set out and was on his way when he caught sight of an Ethiopian. This man was a eunuch, a high official of the Kandake (Candace) Queen of Ethiopia in charge of all her treasure.” (8:27)

The passage continues by describing how Philip helped the Ethiopian treasurer understand a passage from Isaiah that the Ethiopian was reading. After the Ethiopian received an explanation of the passage, he requested that Philip baptize him, and Philip did so. Orthodox Christianity became the established church of the Ethiopian Axumite Kingdom under king Ezana in the 4th century through the efforts of a Syrian Greek named Frumentius, known in Ethiopia as Abba Selama, Kesaté Birhan (“Father of Peace, Revealer of Light”). As a youth, Frumentius had been shipwrecked with his brother Aedesius on the Eritrean coast. The brothers managed to be brought to the royal court, where they rose to positions of influence and converted Emperor Ezana to Christianity, causing him to be baptised. Ezana sent Frumentius to Alexandria to ask the Patriarch, St. Athanasius, to appoint a bishop for Ethiopia. Athanasius appointed Frumentius himself, who returned to Ethiopia as Bishop with the name of Abune Selama.

From then on, until 1959, the Pope of Alexandria, as Patriarch of All Africa, always named an Egyptian (a Copt) to be Abuna or Archbishop of the Ethiopian Church.

The Ethiopian church places a heavier emphasis on Old Testament teachings than one might find in any of the Eastern Orthodox, Roman Catholic or Protestant churches, and its followers adhere to certain practices that one finds in Orthodox or Conservative Judaism. Ethiopian Christians, like some other Eastern Christians, traditionally follow dietary rules that are similar to Jewish Kashrut, specifically with regard to how an animal is slaughtered. Similarly, pork is prohibited, though unlike Rabbinical Kashrut, Ethiopian cuisine does mix dairy products with meat. Women are prohibited from entering the church during menses; they are also expected to cover their hair with a large scarf (or shash) while in church, per 1 Cor. 11. As with Orthodox synagogues, men and women are seated separately in the Ethiopian church, with men on the left and women on the right (when facing the altar). (Women covering their heads and separation of the sexes in churchhouses officially is common to some Oriental Orthodox, Eastern Orthodox and Catholic Christians, as well as many conservative Protestant and Anabaptist traditions; it also is the rule in some non-Christian religions, Islam among them.) Ethiopian Orthodox worshippers remove their shoes when entering a church, in accordance with Exodus 3:5 (in which Moses, while viewing the burning bush, is commanded to remove his shoes while standing on holy ground). Furthermore, both the Sabbath (Saturday), and the Lord’s Day (Sunday) are observed as holy, although more emphasis, because of the Resurrection of Christ, is laid upon Sunday.

The faith and practice of most Orthodox Ethiopian Christians includes elements from Miaphysite Christianity as it has developed in Ethiopia over the centuries. According to researchers Thomas P. Ofcansky and LaVerle Berry, as with many Christian traditions, Ethiopian Orthodox Christianity includes elements from the local non-Christian heritage that are rejected by more educated church members, but usually shared by the ordinary priest.[5] Christian elements include God (in Ge’ez / Amharic, ′Egziabeher, lit. “Lord of the Universe”), the angels, and the saints, besides others.[5] According to the Ethiopian Orthodox Church itself, there are no non-Christian elements in the religion other than those from the Old Testament, or Higge ‘Orit (ሕገ ኦሪት), to which are added those from the New Testament, or Higge Wongiel (ሕገ ወንጌል).[6] A hierarchy of “Kidusan” (angelic messengers and saints) conveys the prayers of the faithful to God and carries out the divine will, so when an Ethiopian Christian is in difficulty, he or she appeals to these as well as to God. In more formal and regular rituals, priests communicate on behalf of the community, and only priests may enter the inner sanctum of the usually circular or octagonal church where the tabot (“ark”) dedicated to the church’s patron saint is housed. On important religious holidays, the tabot is carried on the head of a priest and escorted in procession outside the church. It is the tabot, not the church, which is consecrated. Only those who feel pure, have fasted regularly, and have generally conducted themselves properly may enter the middle ring to take communion. At many services, most parish members remain in the outer ring, where debteras sing hymns and dance.[5]

Ethiopian Orthodox believers are strict Trinitarians,[7] maintaining the Orthodox teaching that God is united in three persons: Father, Son, and Holy Spirit. This concept is known as səllasé, Ge’ez for “Trinity”.

Weekly services constitute only a small part of an Ethiopian Orthodox Christian’s religious observance. Several holy days require prolonged services, singing and dancing, and feasting. An important religious requirement, however, is the keeping of fast days. All devout believers are to maintain the full schedule of fasts, comprising 250 days. 1. Fast for Hudadi or Abiye Tsome (Lent), 56 days. 2. Fast of the Apostles, 10–40 days, which the Apostles kept after they had received the Holy Spirit. It begins after Pentecost. 3. The fast of Assumption, 16 days. 4. The gahad of Christmas (on the eve of Christmas). 5. The fast preceding Christmas, 40 days (Advent). It begins with Sibket on 15th Hedar and ends on Christmas eve with the feast of Gena and the 28th of Tahsas. 6. The fast of Nineveh, commemorating the preaching of Jonah. It comes on Monday, Tuesday and Wednesday of the third week before Lent. 7. The gahad of Epiphany, fast on the eve of Epiphany.

In addition to standard holy days, most Christians observe many saint’s days. A man might give a small feast on his personal saint’s day. The local voluntary association (called the maheber) connected with each church honors its patron saint with a special service and a feast two or three times a year.

The Tewahedo Church Canon contains 81 books. This canon contains the books accepted by other Orthodox Christians.

•  The Broader Canon includes all of the books found in the Narrower Canon, as well as the Josippon, two Books of the Covenant, four Books of Sinodos, an Epistle to Clement, and the Didascalia;

There have been no printings of the Broader Canon since the beginning of the twentieth century. The Haile Selassie Version of the Bible, which was published in 1962, contains the Narrower Canon.

The divine services of the Ethiopian Church are celebrated in the Ge’ez language, which has been the language of the Church at least since the arrival of the Nine Saints (Abba Pantelewon, Abba Gerima (Isaac, or Yeshaq), Abba Aftse, Abba Guba, Abba Alef, Abba Yem’ata, Abba Liqanos, and Abba Sehma), who fled persecution by the Byzantine Emperor after the Council of Chalcedon (451). The Septuagint Greek version was originally translated into Ge’ez, but later revisions show clear evidence of the use of Hebrew, Syriac, and Arabic sources. The first translation into a modern vernacular was done in the 19th century by a man who is usually known as Abu Rumi. Later, Haile Selassie sponsored Amharic translations of the Ge’ez Scriptures during his reign, one before World War II and one afterwards. Sermons today are usually delivered in the local language. 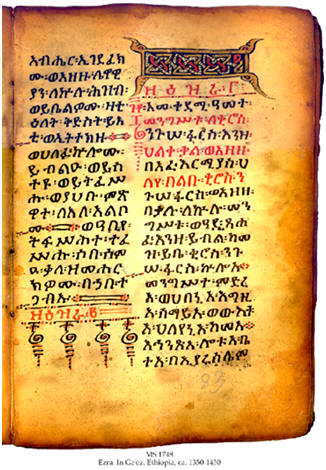 Architecture Below: The Church of Saint George

is a monolithic church in Lalibela. There are many monolithi

c churches in Ethiopia, most famously the above-mentioned twelve churches at Lalibela. After these, two main types of architecture are found—one basilican, the other native. The Church of Our Lady Mary of Zion at Axum is an example of the basilican design, though the early basilicas are nearly all in ruin. These examples show the influence of those architects who, in the 6th century, built the basilicas at Sanˤā’ and elsewhere in the Arabian Peninsula. There are two forms of native churches: one oblong, traditionally found in Tigray; the other circular, traditionally found in Amhara and Shewa (though either style may be found elsewhere). In both forms, the sanctuary is square and stands clear in the center, and the arrangements are based on Jewish tradition. Walls and ceilings are adorned with frescoes. A courtyard, circular or rectangular, surrounds the body of the church. Modern Ethiopian churches may incorporate the basilican or native styles, and utilize contemporary construction techniques and materials. In rural areas, the church and outer court are often thatched, with mud-built walls.

The Ethiopian church claims that one of its churches, Our Lady Mary of Zion, is host to the original Ark of the Covenant that Moses carried

with the Israelites during the Exodus. However, only one priest is allowed into the building where the Ark is located, ostensibly due to dangerous biblical warnings. As a result, international scholars doubt that the original Ark is truly there, although a case has been put forward by controversial popular writer Graham Hancock in his book The Sign and the Seal. Throughout Ethiopia, Orthodox churches are not considered churches until the local bishop gives them a tabot, a replica of the tablets in the original Ark of the Covenant. The tabot is at least six inches (15 cm) square and made from alabaster, marble, or wood (see acacia). It is always kept in ornate coverings on the Altar. Only priests are allowed to touch the tabot. In an elaborate procession, the tabot is carried around the outside of the church amid joyful song and on the feast day of that particular church’s namesake. On the great Feast of T’imk’et, known as Epiphany or Theophany in Europe; group of churches send their tabots to celebrate the occasion on a common location where a pool of water or a river is.